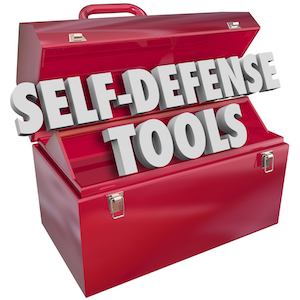 Defense counsel, the lawyer for the person who used the force against another, should be obtained early-on in the process.

Before giving any statement to law enforcement, retain legal counsel immediately. The fact you called a defense lawyer cannot be used as evidence against you.

Consulting with a lawyer and obtaining legal advice is not evidence of guilt or legal responsibility.

In fact, when law enforcement officers are involved in use-of-force matters, it is commonly the practice NOT to immediately interview the police officer in their use of force.

Law enforcement apply a different standard to themselves than the general public.

They recommend police officers be provided a “cooling off period” when the officer uses force to defense themselves or others.

Detectives in Charlotte commonly, if not preferably, immediately seek a recorded statement from the accused at the police station.

Law enforcement policy makers base their support of these delayed interrogations on research concluding that the psychological trauma of critical incidents may create perception and memory distortions and, thus, result in statements that could inadvertently contradict other investigatory evidence.1

"What’s good for the goose is good for the gander. If law enforcement know giving a statement after the use of force by an officer isn’t a good idea, you should follow suit."

The information you share with your defense attorney, even during consultation, is considered confidential.

That means what you share with your lawyer is secret and cannot be disclosed.

Jury instructions and arguments regarding the lawful exercise of the stand your ground laws in North Carolina assume the matter is prosecuted and goes to trial.

An indictment is not a criminal conviction.

The decision of the grand jury to issue what is referred to by defense attorneys as a True Bill of Indictment is not proof or evidence of guilt.

A True Bill of Indictment does not make it more likely that the accused (the person who allegedly committed a crime) will be convicted at trial.

Indeed, the legal standard to obtain an indictment in North Carolina is substantially lower than that required at a criminal trial.

"An indictment is not the same as a conviction. In seeking and obtaining an indictment, it’s pretty clear the State believes legal grounds exist for prosecution. That does not mean their case is strong enough to obtain a conviction."

The State of North Carolina carries the burden of proof and production.

The standard of proof for criminal charges is the “highest in the land” for any legal matter, that being proof beyond a reasonable doubt.

Prove beyond reasonable doubt is a constitutional protection afforded under both the constitution of North Carolina and the United States constitution.

Legal issues involving self-defense and the North Carolina stand your ground laws obviously tend to be very serious given the use of force may in fact involve the death of another.

"I’ve spent a good portion of my legal career taking on serious criminal charges and helping people in North Carolina when accused of crimes. We enjoy helping people." 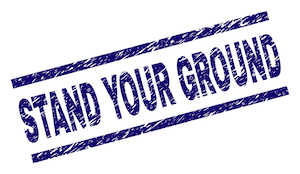 If you have been involved in an incident whereby you have been required to defend yourself or others, or use any level of deadly force, retain legal counsel immediately.

You have the legal right to remain silent. Ask for an attorney.

“Take the fifth” and lawyer up. You have the legal right to an attorney even during the investigatory stages of a case.

The fact you have consulted with an attorney cannot be used as evidence against you at trial.

You are not required to give a statement to police or cooperate with an investigation.

We recommend you politely decline to cooperate in an investigation. Do not give a formal statement or even try to explain what happened.

Call Charlotte defense lawyer Bill Powers now at 704-342-4357 if you would like to schedule a legal consultation.

You may also email Bill Powers directly at: Bill@CarolinaAttorneys.com