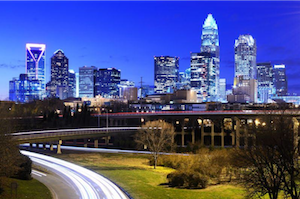 Things are just different now on campus and with criminal charges in NC.

What once could have been deemed a “youthful indiscretion” may now be, both literally and figuratively, a “federal offense.” Institutions of higher education in North Carolina find themselves squarely in the middle of a cultural battle involving legal issues such as criminal charges, rape, sexual misconduct, sexual harassment, assault, assault and battery, and communicating threats.

While much attention has been given by the media to Title IX sexual investigations and allegations of sexual misconduct at colleges and universities, few people understand the full extent of how the collaborative effort between university officials and law enforcement to pursue and eliminate sex crimes on campus have affected OTHER, more minor criminal charges.

In fact, it doesn’t much matter if it involved felony or misdemeanor criminal charges. There now exists a “full court press” on criminal allegations and the associated bringing of criminal charges in North Carolina.

“What we’re seeing is nothing less than a seismic shift in criminal law enforcement against college students, where relatively minor infractions are being investigated and prosecuted in criminal court, with the incumbent criminal charges, arrests, and criminal citations, to the fullest extent of the law.”
- Bill Powers

Without passing judgment on the logic or reasonableness of enhanced law enforcement, the simple truth is, college students are being accused of criminal charges and facing criminal cases in Charlotte NC, within the Mecklenburg County courts, with ever-increasing frequency. 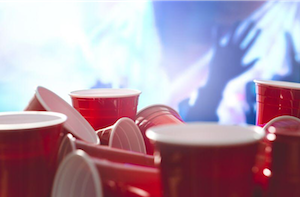 What might, in the past, have been a student code violation for an alcohol violation is often now prosecuted by law enforcement in a Charlotte criminal court.

Even in matters taking place off campus, UNC Charlotte public safety officers (UNCC police) or campus police are involving themselves in criminal investigations and bringing criminal charges against students subject to the code of conduct of the University of North Carolina system.

“This is considerably beyond bringing beer into a dorm or other, relatively minor, criminal charges or misdemeanors or criminal allegations like possession of marijuana or possession of drug paraphernalia. We’re seeing UNCC police raiding off-campus parties, fraternity and sorority social events, and actively issuing traffic tickets on roadways not specifically on campus property. Sometimes that’s legal and frankly, sometimes it’s not.”
- Bill Powers 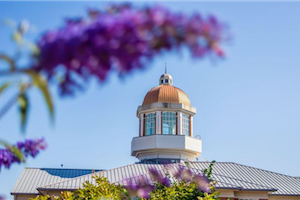 riminal charges involving college students often start with possession of alcohol allegations or “underage possession” charges, but the defense lawyers at our law office also regularly help college students with other campus criminal offenses such as:

**For more information on “drunk driving” charges or allegations of impaired driving, and the differences between DUI and DWI charges in North Carolina, CLICK HERE

“It’s become quite complicated. College kids often misunderstand the criminal laws in NC. They incorrectly assume search warrants and Miranda Rights are required in every instance. That simply isn’t the case.”
- Bill Powers

College students also make another common mistake: They fail to fully understand the nature and consequences of their actions. They often do not fully comprehend the level or the extent of the dangers they face in taking the “I’ve got this” approach.

Criminal defense lawyers regularly encounter legal issues, including criminal allegations for felony or misdemeanor charges, where the young adult gets VERY deep into the legal process before seeking assistance or guidance from a defense attorney or even a parent.

That is a tremendous mistake. Defense lawyers often help as much before criminal charges are brought as after an arrest is made or a criminal citation issued. It’s also true where a college student pays off a traffic ticket, not understanding that doing so may affect the parents’ insurance rates. That sometimes comes in addition to adding important motor vehicle points to the young driver’s North Carolina Driving Record.

It is important to realize that many, if not most, criminal defense lawyers in NC give a FREE legal consultation, even to people who have not been formally charged with a criminal offense. Defense lawyers prefer to get involved early on.

“As defense lawyers, we want people to call us, even just to ask legal questions before an allegation is made or criminal charges are brought. It’s better to ask a lawyer, with the protection of attorney-client privilege than your friend, your roommate, or frankly, almost anyone else. If you have questions or are worried you MIGHT have done something questionable or illegal, call a defense lawyer now.”
- Bill Powers

**For more information on the attorney-client privilege and consultation with a criminal defense lawyer, CLICK HERE to review our blog: What Is the Next Step After the Free Consultation?

Defense lawyers, especially those experienced with handling both criminal charges in NC and civil cases, understand the intricacies of the law involving the entanglement of law enforcement and university administrative officials.

That is especially true in Title IX investigations, which are notoriously complex.

It is a common public misconception that Title IX applies only to NCAA athletics, specifically regarding admissions and public funding issues for women’s athletics. While that is part of the intended purpose of the federal legislation, relatively recent opinions by the United States Supreme Court have substantially extended the nature, scope, and purposes of Title IX.

In fact, one can reasonably state that application to Title IX to public colleges and universities within the University of North Carolina system has fundamentally changed the culture of student life, both on and off-campus. It may also prove to be the most expansively applied form of federal legislation since the respective Civil Rights Acts of the 1960s.

Allegations of sexual misconduct can, and often do, have consequences both in criminal court, with police bringing criminal charges, and in the “civil” legal system that has been extended to federal equal rights legislation through Title IX of the United States Code (USC).

“What students often fail to realize is that a University investigation into an allegation of sexual harassment or some more serious sexual activity can easily turn into a full-fledged criminal investigation for felony charges. Even if criminal charges are never brought, there can be life-changing consequences with a finding by university officials of sexual misconduct.”
- Bill Powers 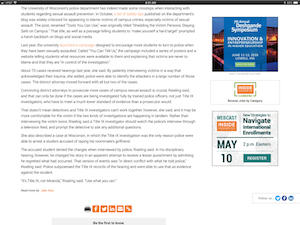 The logic is this: It’s too hard to get a criminal conviction in criminal court, due to the various protections under the United States Constitution and North Carolina Constitution. 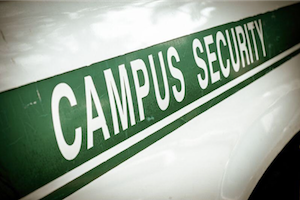 Therefore it’s OK to use a civil process, established under federal law that was intended to give an equal educational experience to women, as a tool to gather evidence for a criminal prosecution.

In the above article, which you may read by clicking the image that contains an internal link, the following assumptions/statements are set forth:

While there may be a historical basis for such broad expansion of the federal statutes, the fact is this: Title IX procedures are ACTIVELY employed to assist the investigation of criminal allegations and bring criminal charges in NC courts.

The building-blocks of North Carolina criminal laws, as well as NC civil laws, include the Rules of Evidence, Standards of Proof, and Due Process of the Law. In a criminal investigation, certain protections are afforded to someone even merely accused of a criminal offense, prior to facing criminal charges.

“What concerns me and other criminal defense lawyers is the use of a university system process, well-intended as it may be, to circumvent, if not entirely eliminate, due process of law and concepts of fundamental fairness.” ”
- Bill Powers

And therein lies the danger. College students do not always understand the intricacies of the process, which may start with a less obvious “inquiry” within university system. Students may unintentionally cause criminal charges in the criminal justice legal system.

They may give a statement, in good faith, not comprehending what is going on, what legal process has begun, or what the motivations may be of the person asking the questions. They may not realize that confidentiality may not apply; in fact, there are instances when university officials believe they are legally required to disclose the confidences and involve law enforcement, even if that runs contrary to the stated wishes of the person making the allegation.

One of the more disturbing aspects of the Title IX materials references “thought confusion” after an event, and referring to the person making the criminal allegations, from the outset, as the “survivor.”

Of particular note is the apparent need to provide “one or two sleep cycles” before conducting an interview, ostensibly to allow the alleged victim to “get their story straight.” 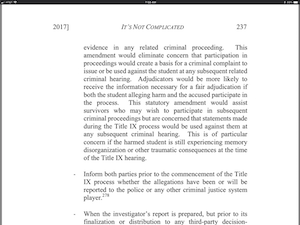 Contrary to the self-titled legal journal, “It’s not complicated,” criminal charges on college campuses are incredibly complicated and deserve the attention of an experienced criminal defense lawyer. There are important interactions between the civil courts system and a criminal investigation for felony charges like rape, first degree sex offense, and other felony assault charges.

It doesn’t really matter if it’s felony vs. misdemeanor - call the Charlotte NC defense lawyers at our law office now for a FREE CONSULTATION. 877-462-3841. It is especially helpful if our defense attorneys in Charlotte, NC can get involved early-on in the process, before a statement is made without Miranda warnings, or without the benefit of legal advice. 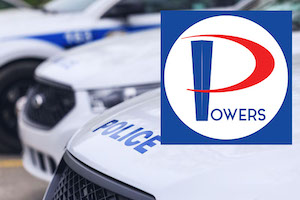 If you are dealing with more minor criminal charges like traffic tickets, or traffic offenses like speeding, driving without a license, “no operator’s license” or driving while your license was revoked or suspended, we’re here to help.

“If you are facing criminal prosecution, we encourage you or your family to call an experienced criminal defense attorneys. Whether it is our law office or another North Carolina criminal defense law firm, don’t wait. Get legal advice immediately.”
- Bill Powers