A Closer Look at State v. Cobb and DWI Checkpoints in North Carolina 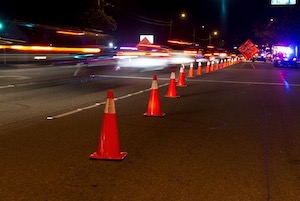 We have previously written about DWI roadblocks and checkpoints in the context of an arrest for Driving While Impaired, but we are taking the time to revisit the law concerning "drunk driving" / DUI checkpoints and incorporate new developments as well as address the recent NC Supreme Court case from May 6, 2022, North Carolina v. Cobb.

The Historical Basis of DWI Checkpoints in NC: The Defense Lawyers' Perspective

Over the years, courtroom lawyers have adapted to the progressing phraseology and judicial sentiments regarding "checking stations."

At one time they were called drunk driving checkpoints or a DWI roadblock by law enforcement agencies, prosecutors, and defense lawyers. Roadblock is both an accurate and appropriate term.

Of course, that was more common when the BAC "legal limit" was .10, dexterity tests were "verified" and predicated on that numeric value, and public sentiment seemed concerned with and therefore focused on criminal charges related to "drunken drivers" or "drunk driving."

At the time, appreciable impairment was largely not, even among legal professionals, conceptualized as a basis for a conviction of DUI or DWI or one of the many other popular acronyms. Indeed, to this day N.C.G.S. 20-138.1 refers to the offense of Impaired Driving, not DWI charges or DUI.

The Finger to Nose Test and the Breathalyzer 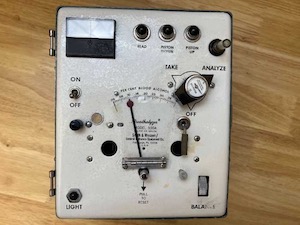 If stopped at an old school DWI checkpoint, drivers were requested to perform dexterity tests involving almost exclusively the Finger to Nose test, the Finger Count, and perhaps recitation of "your ABCs without singing them."

The authorized (by the North Carolina Administrative Code) testing device at the time was the Smith and Wesson Breathalyzer 900 (900A), also known as the "dial a drunk." Some of the nomenclatures regarding the Breathalyzer exist to this day, including the terms test ticket, alcohol breath simulator solution, and calibration.

Of course, back then the chemical analyst could not also be the charging police officer, who was almost always the LEO who requested the accused perform field sobriety tests.

A limited number of police officers carried a portable "breathalyzer," known as the AlcoSensor or AlcoSensor II, to assist with the arrest decision and formulating probable cause on DWI cases.

The AlcoSensor eventually became more commonly referred to, in part due to the marketing efforts of the Intoximeters corporation as an "instrument" and PBT - Preliminary Breath Test or approved screening test device.

Probable Cause and the DWI Checkpoint 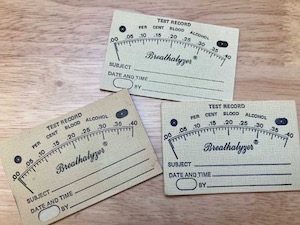 Prior to substantive and substantial changes to the NC DWI Laws, if counsel challenged probable cause to arrest, the AlcoSensor breath test numeric reading was admissible, by statute.

When challenging the legality of a DWI checkpoint or probable cause, a pretrial motion also was not required. Such legal issues were argued after formal arraignment and during the State's case-in-chief.

As the law and associating testing protocols advanced, including more particularized and extensive standardized field sobriety tests (SFSTs), we slowly began to refer to checkpoints as sobriety checkpoints, then DWI checkpoints, and finally checking stations.

A "sobriety checkpoint" and law enforcement were tasked with the responsibility to "make sure you're OK to drive."

Sobriety checkpoints were generally not nuanced exercises, focusing on the loss of mental or physical faculties to such an extent that they could be appreciated, observed, or explained. One might best describe a DWI checkpoint as roadside triage.

The NC General Assembly likely never intended for a police officer to only arrest "drunk drivers."

It was rightly concerned with alcohol-related accidents and the associated fatalities, thus necessitating greater attention to appreciable impairment, whether a result of consumption of prescription drugs, over-the-counter medicines, or illegal substances like marijuana.

Obviously, some DWI checkpoints were creatively, and purposely, entitled "license checks" for a reason. Some might consider the exercise a less than intellectually honest effort to avoid the complexities associated with a DWI checkpoint vis-à-vis statutory and constitutional considerations.

Trial courts rarely, if ever, encountered license checkpoints set up from Monday through Friday, 7:00 a.m. until 7:00 p.m.

License checkpoints were common in areas of town in close proximity to alcohol-serving restaurants and bars, especially on Friday and Saturday nights, during the hours immediately before and after 2:00 a.m., which not so coincidentally is when bars close under the ABC laws.

One would reasonably conclude, at least in part, that's why the Rose and Veazey Courts made some effort to explain that it doesn't much matter what you call the checkpoint, roadblock, or checking station in answering the age-old question, "Are DUI checkpoints legal?"

The DWI Checkpoint: Unlike Any Other "Stop" 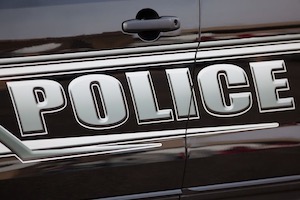 The legal issues under North Carolina law, to some degree, involve a heightened degree of inquiry.

Most notably, that is because unlike almost any other Chapter 20 enforcement action, or truly any other criminal investigation, there is neither Reasonable Suspicion of criminal activity afoot nor Probable Cause.

Checkpoints intrude on the rights of all citizens, whether or not they have exhibited reasonably suspicious behavior.

Is Reasonable Suspicion Relevant to the Conversation?

The law generally requires reasonable and individualized suspicion of criminal activity to effectuate a seizure or stop.

However, one type of exception to the general rule is when an individual is pulled over or “seized” during a checkpoint or roadblock.

Roadblocks were first expressly authorized under North Carolina General Statutes in 1983 when the legislature passed the Safe Roads Act.

The present statute governing the implementation of roadblocks is found under N.C. Gen. Stat. § 20-16.3A.

What Kind of Analysis Does the Court Perform When Examining the Validity of a Checkpoint?

Whenever a defendant is charged with a criminal offense as a result of being stopped during a checkpoint, the Fourth Amendment of the United States Constitution is implicated for purposes of analysis.

When a Defendant challenges the Constitutionality of a checkpoint, Courts will (1) examine the evidence to determine the primary purpose of the checkpoint program and (2) determine whether the checkpoint was reasonable. See State v. Rose, 170 N.C. App. 284 (2005).

What is the Primary Programmatic Purpose?

The first inquiry into the primary purpose of the roadblock requires the Court to look at the roadblock at the “programmatic level” or determine whether the roadblock was carried out consistent with how it was planned.

Should the Court conclude that the roadblock was performed consistent with its primary purpose, they then determine whether the roadblock was reasonable using a balancing test of the government’s interest in conducting a checkpoint against the degree of intrusion to the individual.

To aid the Court in its determination, the Court considers a list of factors set out in Texas v. Brown, a United States Supreme Court case.

The factors include (1) the gravity of the public concerns served by the seizure (2) the degree to which the seizure advances the public interest (3) and the severity of the interference with individual liberty.

The determination is not as formulaic as it sounds and a considerable amount of discretion is given to the fact finder, but a checkpoint is deemed reasonable and constitutional if the factors weigh in favor of the public interest.

North Carolina courts have interpreted the Constitutionality of roadblocks using this framework for decades and the outcome in State v. Cobb demonstrates the continued use of the framework and an in-depth analysis regarding the reasonableness prong of the above test including the Brown factors.

In Cobb, the Defendant was charged with a DWI after being stopped at a checkpoint.

At trial, Defendant filed a motion to suppress evidence of her blood alcohol level arguing that the checkpoint was unconstitutional.

However, the Court of Appeals vacated the trial court’s order denying defendant’s motion to suppress.

One Appellate Judge dissented which provided the vehicle for the State to appeal the Appellate Court’s decision.

Ultimately, the Supreme Court reversed the Court of Appeals and reinstated the order of the trial court denying Defendant’s motion to suppress.

Does State v. Cobb Advance the Law on DWI Checkpoints or Supersede Precedent? 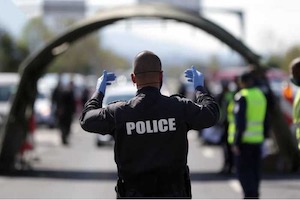 The crux of the North Carolina Supreme Court opinion wrestles with the Brown factors stated above.

As to the first factor, the Court found that since the check point’s purpose was to check for driver’s licenses, “the public concerns served by the seizure outweigh the Fourth Amendment interest of individuals.”

Second, the Court found that the police appropriately tailored their checkpoint that advanced the public’s interest in detecting impaired drivers since law enforcement focused on a specific road that was a short distance from the highway where three county lines converge and only conducted stops between 12:15 – 2:00 AM.

Finally, the Court concluded that the “public interest served by the checking station outweighed the intrusion on defendant’s liberty interests.”

In support of this finding, the Court was persuaded by the fact that the officers did not have unfettered discretion in how to conduct the plan and that personnel (law enforcement officers/police officers) had limitations regarding the location and timeframe of the checkpoint.

In addition, all vehicles were stopped pursuant to the established plan and while “traffic did back up some,” it was “not extreme.”

Therefore, the Supreme Court opined the checkpoint was reasonable under the Fourth amendment.

While Cobb does not represent some grand departure from previous case law, the case is a good demonstration of the analytical process that the Court engages in to determine the constitutionality of checkpoints and illustrates that sobriety checkpoint cases are incredibly fact-specific requiring substantial scrutiny of the details.