THE MATERIALS CONTAINED HEREIN ARE INTENDED TO BE AN INFORMATIVE AND EDUCATIONAL LEGAL REFERENCE SOURCE FOR LAW STUDENTS, NEW ATTORNEYS, LEGAL PROFESSIONALS AND OTHERS INTERESTED IN LEARNING MORE ABOUT THE LEGAL SYSTEM IN NORTH CAROLINA.

ONE WOULD BE WELL-SERVED TO UTILIZE THIS INFORMATION AS A STARTING POINT IN UNDERSTANDING THE OFTEN TIMES CONFUSING AND COMPLEX LEGAL SYSTEM IN NORTH CAROLINA. LAWS CHANGE, THEREFORE MAKE CERTAIN TO REVIEW THE STATUS OF AMENDMENTS. SEE LINK BELOW TO THE NORTH CAROLINA GENERAL ASSEMBLY WEBSITE.

How have cultural changes in North Carolina affected legal representation and the attorney-client relationship in NC DWI cases? In a generation defined by self-realization, can Charlotte DWI lawyers effectively explain a complicated and sometimes inequitable legal system?

Driving While Impaired in North Carolina has become increasingly complicated since the days of “drunk driving” and the 0.10 BAC. While always one of those types of criminal charges with at least the potential to result in substantial harm or injury, the most notable of which is the death of another associated with a felony DWI indictment, it was for years largely discounted as “bad luck” if someone “got caught drunk driving.”

That mentality was firmly rooted, for generations, in a few notable assumptions held by the general public and therefore criminal defense clients, to wit:

The concept of “drunk driving” in the era of UBER, LYFT, and consumer-driven services has become an anathema of sorts. Serving as legal counsel to clients accused of impaired driving in the 21st century requires a certain level of “re-education.”

Indeed, there seems almost an air of superiority even amongst the set whom have literally just been released from custody. How often have criminal practitioners heard, “I would never do that. I’m against drunk driving?”

The logic goes like this: With the ease of “not driving” in places like Raleigh, Greensboro, and Asheville, and even Wilmington NC, there is absolutely no reason for DWI in Charlotte NC.

“I once had a client tell me she believed ‘people who drive drunk should get the death penalty if they kill someone.’ Mind you, this was a person whom had caused a near-fatality wreck with a BAC exceeding .20. She failed to see the irony, and perhaps the hypocrisy, of her proclamation. And therein lies the rub.”
Bill Powers

The disconnect between personal actions and accountability merits discussion among legal professionals. It seems likely that “disconnect” is ingrained in, if not an endemic part of, our cultural and societal norms in the United States of America. Put simply, people charged with DWI rarely fully comprehend the true nature and extent of their own behavior(s) related to an arrest.

One would be remiss in failing to note that there are substantial differences to criminal laws and public policy concerns regarding DWI-DUI even between our two closest international neighbors, those being Canada and Mexico.

Canada’s DWI laws are downright progressive compared to the North Carolina DWI laws. And yet, allegations of driving while impaired in Canada are dealt with in a swift, decisive, and to some, harsh fashion. Legal protections or “rights” like Probable Cause to Arrest and Miranda Warnings are largely inapplicable.

And while Canada might apply retributive-type action at lightning speed, including “booting” the vehicle used during the offense, immediate suspension of the driver’s license or operators privilege, and mandatory alcohol assessment and treatment, actions are civil, administrative in nature, and viewed in the community as part of a restorative process.

The anecdotal commentary on Mexican DWI laws is that they, the driving while impaired laws, are nearly the exact opposite and so laxly applied as to be essentially non-existent. Clearly that thought process could easily be construed as more than a bit xenocentric.

It would be a mistake in failing to note countries other than the United States who punish people convicted of DWI-DUI charges based on the harm actually committed, as opposed to the potential for harm or damages that may have, but didn’t, occur.

Punishments for driving while impaired may be quite severe in instances where a death results from “drunk driving,” even in places where day-in-day-out enforcement is less proactive.

Criminal defense lawyers in Charlotte NC and other jurisdictions in North Carolina are therefore relegated to trying to explain a sometimes inexplicable legal system. That’s in addition to addressing the complexities of calendaring court appearances and explaining the long-lasting aspects of the DWI conviction.

“Spending time focusing on the inequities of the criminal justice system, and what most certainly must be perceived as ‘unfair laws’ or DWI laws that are applied in unequal fashion between jurisdictions, seems to be the norm, and not the exception nowadays.”
Bill Powers, Criminal Defense Lawyer Charlotte NC

How often have criminal defense lawyers in North Carolina and other jurisdictions heard things like:

The concept of a “permanent record” is foreign to many. How often, as a defense attorney, have you dealt with the assumption that even the most serious of felony criminal charges in NC can be expunged? Even low-level or “first offense DUI” violations of N.C.G.S. 20-138.1 are assumed eligible for reduction as a “reckless driving” or “wet reckless” charge and eventual expunction.

Under the North Carolina DWI laws, nothing could be less likely or further from the truth. Experienced defense lawyers lament the current status of the DWI laws, fully admitting that things likely will “only get worse.” The second half of that common tome, “before they get better,” is truncated for good reason.

No one with any level of intellectual honesty toward the DWI laws in NC expects them to get better. . .ever.

That may be for good reason. DWI in Charlotte NC and impaired driving charges in North Carolina as a whole are no longer acceptable, excused, or varnished over by society, even by those accused of DUI charges in NC. 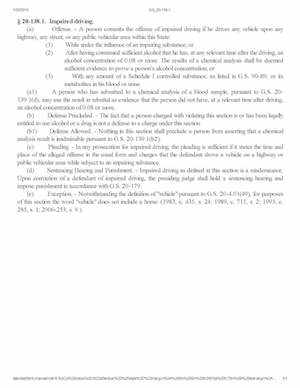