Criminal Justice - Criminal justice is the delivery of justice to those who have committed crimes. The criminal justice system is a series of government agencies and institutions whose goals are to identify and catch unlawful individuals to inflict a form of punishment on them. Other goals include the rehabilitation of offenders, preventing other crimes, and moral support for victims. The primary institutions of the criminal justice system are the police, prosecution and defense lawyers, the courts and prisons. 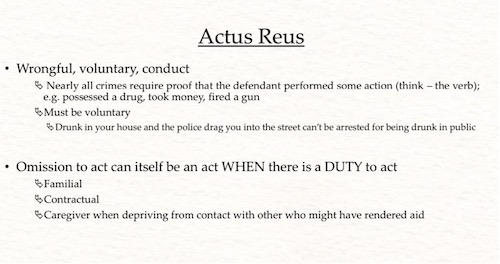 *Ranked according to the degree of culpability and punishment associated with the mental state. (e.g. Purposely is the hardest to prove and carries to heaviest punishment

Two Types of Defenses to Attack the Elements

Public Welfare Offenses: Supreme Court found it permissible for the legislature to enact a law that imposes criminal punishment when the violation involves protection of the public welfare without requiring proof of defendant’s conduct.

Prosecutions Burden: When a statute imposes strict liability, then the prosecutor need not prove the defendant’s state of mind at the time of the violation. Once Actus Reus is established, then liability is imposed 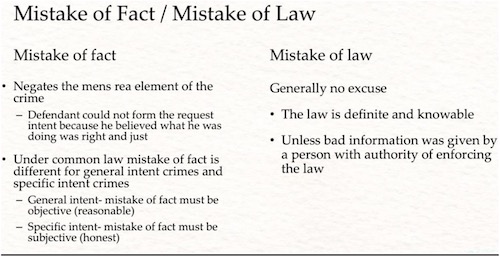