*For additional information regarding the criterion for inclusion or membership for lawyer associations, awards, & certifications click image for link.
Home
South Carolina General Statutes
Unlawful Carrying of a Handgun in a Vehicle

Unlawful Carrying of a Handgun in a Vehicle 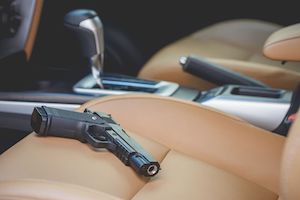 Carrying a handgun in a vehicle under South Carolina Code § 16-23-20 is a misdemeanor criminal charge involving allegations that the defendant possessed a handgun (concealed or not) in their vehicle that does not comply with the exceptions specified by statute regarding carrying a handgun.

In order to be convicted of this crime, the prosecutor for State of South Carolina (also referred to as the “solicitor” by defense lawyers and other legal professionals) must prove the elements of the offense “beyond a reasonable doubt” in court.

To prove that a defendant unlawfully carried a handgun in their vehicle, the solicitor must generally prove:

The most common areas that people keep handguns that violate this section are under the seat, in pockets of the car door or seat, and between a console and seat.

2. Examples of Unlawful Carrying of a Handgun in a Vehicle

The Defendant is stopped by law enforcement for speeding on Gold Hill Road in Fort Mill. When the Officer approaches the vehicle, he notices a gun handle sticking up between the center console and the driver seat. The Defendant wasn’t aware the gun had to be secured in South Carolina. The Officer seizes the handgun and the Defendant may be charged with speeding and Unlawful Carrying of a Handgun (in a vehicle), a Misdemeanor Offense. Conviction of weapons offenses may ultimately result in the revocation and/or rescission of a Concealed Carry Permit, even if issued in another state like North Carolina.

The Defendant is stopped for a traffic violation in Indian Land, SC. The Defendant is from Charlotte, North Carolina where handguns must be openly visible in the interior of the vehicle. The Defendant takes his gun out of the glovebox and puts it on the dashboard, thinking that’s what he is supposed to do. When the Officer approaches the driver window, the Defendant immediately notifies him of the gun and points to the dashboard. The Officer may seize the pistol and charge the Defendant with Unlawful Carrying of a Handgun (in a vehicle), a Misdemeanor Offense.

4. Defenses to Unlawful Carrying of a Handgun in a Vehicle 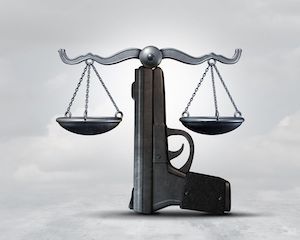 A Defendant can challenge the offense of Unlawful Carrying of a Handgun in a Vehicle by disputing the elements of the charge. For example, if the Defendant can show that the gun was in an area authorized under the SC Criminal Laws or as otherwise permitted consistent with a valid Concealed Carry Permit.

Additionally, the handgun must be confiscated by Law Enforcement. However, it cannot be disposed of until the case is resolved in court. SC Code § 16-23-50(B).

6. Criminal Defense for Unlawful Carrying of a Handgun in a Vehicle

If you or someone you know has been charged with Unlawful Carrying of a Handgun in a Vehicle, it’s important to consult with a criminal defense attorney.

Mr. Beddow is the sole attorney licensed to practice law in the South Carolina and is responsible for all website content regarding South Carolina legal matters.