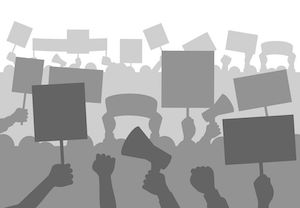 Under South Carolina Code Annotated 16-3-210, the crime of assault and battery by mob is defined as any act of violence inflicted by a group of 2 more or persons which results in either: (1) death, (2) serious bodily injury and/or (3) bodily injury to an individual or group of individuals.

To prove the crime of assault and battery by mob, the State of South Carolina carries the burden of production of admissible evidence and burden of proof Beyond a Reasonable Doubt:

A “mob” occurs when two or more people assemble, without the authority to do so under law, for the premeditated purpose and intent to commit an act of violence against the person of an individual or the person of a group of individuals.

For other similar articles or related statutes to larceny, please see:

If a Defendant can prove that the assemblage of two or more persons was not for the premeditated purpose to inflict violence on another, the defendant should not be convicted of assault and battery by mob. Additionally, if the Defendant can show that no one was harmed by the mob (physical injury), that may serve as a valid defense to the criminal charge of assault and battery by mob.

5. Penalties for Assault and Battery by Mob

The crime of assault and battery by mob in the first degree is a felony punishable by a maximum period of incarceration of thirty years in a state correctional facility.

The crime of assault and battery by mob in the second degree is a felony punishable by a maximum period of incarceration of twenty-five years in a state correctional facility.

The crime of assault and battery by mob in the third degree is a misdemeanor punishable by a maximum period of incarceration of one year in a county jail and/or state correctional facility.

In addition to prison time, any and all members of the mob may be subject to civil liability (money damages) for any injury/damages caused by their violent actions.

6. Criminal Defense for Assault and Battery by Mob

If you have been charged with assault and battery by mob, you need to consult with an experienced South Carolina criminal lawyer.

This crime carries the potential for substantial prison time and monetary damages. A felony can permanently hinder you from leading a meaningful life and this crime can also affect you substantially economically.

At Powers Law Firm PA, our South Carolina attorney Chris Beddow works hard to protect the liberties of the accused and zealously defend you in court.