Initiation ceremonies to fraternities, sororities, clubs, and other social societies are under increased scrutiny by the community. Criminal liability may include a predicate charge of assault, battery, and other acts of violence that subject students to physical injury as a prerequisite to membership or initiation. Hazing is a Class 2 misdemeanor charge under North Carolina Criminal Law Section 14-35.

In order to prove the defendant guilty of Hazing, the State must prove the following prima facie elements Beyond a Reasonable Doubt:

Other related or similar offenses may include:

Upon receiving a “pledge pin,” a freshman voluntarily participates in an initiation into Alpha Beta fraternity. As part of the “pinning” ceremony while blindfolded, the pledge trips and falls, breaking his leg. The Pledge Master may be charged with hazing in North Carolina.

The President of Alpha Beta, while reading the oath of brotherhood, instructs pledges to walk the trail of faith while blindfolded. Thereafter, the pledge breaks his leg. The President may be found guilty of hazing, as he aided and/or abetted hazing.

The Chapter Advisor of Alpha Beta, a recent graduate, “paddles” a blindfolded pledge, causing him to lose balance and break his leg. The Chapter Advisor cannot be found guilty of hazing, as he is not a student. He may face other criminal charges involving assault and battery.

Consent or voluntarily participation with initiation ceremonies is not a defense to the criminal charge of hazing in North Carolina.

Statutory language defining membership into “or other similar group” may be deemed overly broad or vague and therefore void under the North Carolina Constitution and United States Constitution.

Hazing in North Carolina is a Class 2 Misdemeanor and carries a maximum period of incarceration of 60 days. If convicted of hazing, the defendant may also be subject to a period of supervised probation, costs of court, fines, and civil liability for consequential damages. 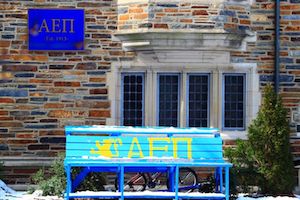 Hazing is not a thing of the past. Social organizations, fraternities, bands, and sports teams continue in “traditions” that more than occasionally result in serious injuries and even fatalities of pledges and initiates.

Criminal charges in North Carolina often involve other misdemeanor offenses including assaults and crimes of violence. The acts of “hazing” may also result in felony charges, including murder, manslaughter, and felony assaults.

National Fraternities have long prohibited hazing under the “Charter” of the organization. Most colleges and universities have adopted expansive definitions of hazing which are not limited to inflicting physical injury and may include threats, mental and psychological harassment, and other demeaning acts.

Allegations of hazing are popular subjects of investigative media reports, and may result in civil causes of action for damages and expulsion from school.

If you have been accused of hazing, or are currently subject to an investigation, exercise your right to counsel and right to remain silent under the 5th Amendment.

It’s extremely important to meet with an established Charlotte Criminal Defense Lawyer as soon as possible.

North Carolina Criminal Defense Attorney Bill Powers is a Board-Certified Criminal Law Specialist by the National Board of Trial Advocacy and a former President of the North Carolina Advocates for Justice.

Consultations regarding criminal charges involving Hazing are free of charge and confidential.