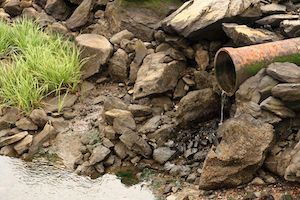 Under North Carolina Criminal Law Chapter 14-284.2, the crime of dumping toxic substances occurs when a defendant knowingly deposits, discharges, dumps, spills, releases, burns, incinerates and/or disposes of a toxic substance into the environment in contravention of federal or state law.

To prove a charge of crime of dumping toxic substances, the State must be able to establish the following prima facie elements Beyond a Reasonable Doubt:

“Radioactive materials” are defined as means any solid, liquid, or gas which emits ionizing radiation spontaneously.

“Knowingly” means consciously or with knowledge or complete understanding of the facts or circumstances.

Dumping of Toxic Substances is a specific intent crime. The State bears the burden of proof to show the accused acted in a willful, intentional manner.

Criminal lawyers may refer to that level of intent as one of the necessary, prima facie elements of the offense known as the mens rea.

The intentional “dumping” amounts to the actus rea of the criminal charge.

Defendant’s best friend has property with access to a trout stream that feeds into a larger river. This river sustains a nearby population’s water supply. Defendant knows that best friend loves to fish on this stream and he is also aware that this water feeds into a large river downstream. Defendant finds out that best friend took his girlfriend fishing on the stream without his knowledge and that best friend and girlfriend were engaged in a sexual relationship behind his back. Seeking revenge, Defendant dumps a large amount of mercury into the stream killing all the fish and contaminating the drinking water of nearby residents. Defendant can be charged with dumping of toxic substances.

Defendant purchases an abandoned warehouse and plans to renovate it for apartment use. While investigating the warehouse, Defendant locates several old rusty barrels that are full of engine oil. Defendant notices a skull and crossbones with the word “hazardous” written beneath it on the side of the barrels. Defendant reaches out to a local hazardous waste removal service. Defendant is unhappy that the service quoted him $3,000 to remove the materials. Rather than pay, Defendant takes the barrels to a nearby river and rolls them in the water. The old, rusty barrels begin to leak oil into the river causing thousands of nearby residents to get sick from drinking the water. Defendant can be charged with dumping of toxic substances.

4. Defenses to Dumping of Toxic Substances 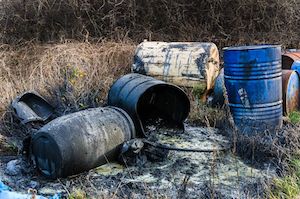 The punishment for the crime of dumping of toxic substances is a Class F felony punishable by a maximum period of incarceration of 62 months in a state correctional facility.

If you have been charged with dumping of toxic substances, it important to understand that this is a very serious felony offense.

“Dumping” cases also subject the accused to civil liability. Certain allegations can in fact also be prosecuted in Federal Court for violations of the United States Code (U.S.C.) as annotated.

They can attract the attention of the media, especially in instances that result in the release of toxic, carcinogenic (cancer causing) and possibly deadly substances.

If you have been accused of dumping toxic substances, we recommend you consult with a criminal attorney without delay.

Prior to cooperating with any environmental, civil, or criminal investigation, we recommend you retain legal representation.

Exercise your right to remain silent.